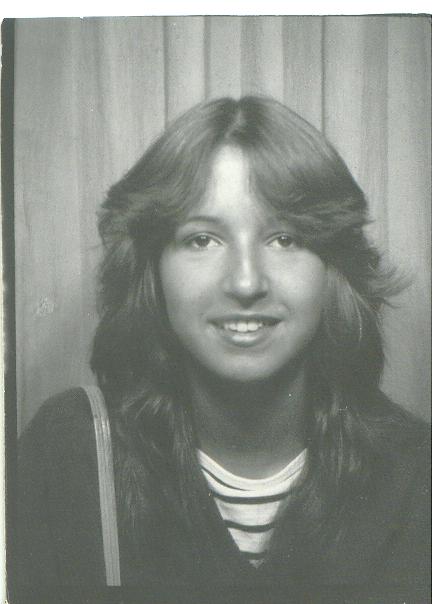 Seeing all these old photos reminded me of my high school in Sainte-Agathe and of the ‘front door gang’ that I used to hang out with. My sister, who is 13 months older than me, was in the ‘disco gang’. Wow. Because these two gangs were in a bit of a style war with one another at school, we hardly spoke at home. I would walk around in my jean overalls and Kodiak boots, and my sister would walk around with her Farah Fawcett haircut and copious amounts of mascara. It was a wonderful and difficult time, all at once. Learning to find one’s personality through those of others, understanding that everything is in front of us and that we would be able to change our style 100 times during our life if we ever got sick of the overalls and Kodiak boots duo (I’ve gotten over this duo, no need to worry :)).

Some experts in digital communication strategies suggest that our confinement might explain the childhood photo trend on social media. As we are all confined to our homes, people have finally had the time to dust off old photo albums or clean out the shoebox full of memories hidden in the basement.

We will probably never know the exact cause of this social trend. However, when I started reliving old childhood memories after seeing my Facebook friends’ childhood photos, the first question I asked myself was: “Are these memories positive or negative?”

So, I started having fun looking into the time perspective of my memories. In 1999, Philip Zimbardo and John Boyd, two Stanford University researchers, began to investigate the impact of time perspective on people’s emotions and moods. Time perspective refers to the moment (present, past or future) in which we situate the majority of our lives. Therefore, some people live most of their lives in the past, while others will neverendingly throw themselves into the future, and some live in the present moment.

Although many personal growth advisors keep saying that we should spend our time in the present moment, it is not as straightforward as that for Zimbardo and Boyd. They have shown that the three major time perspectives can have a different impact on our emotions depending on the nature (positive or negative) of the time perspective that is adopted.

Thus, although some people are able to spend most of their lives in a ‘positive present’, many others live in a ‘fatalistic present’, in which all events that occur in the ‘here and now’ are experienced as very negative.

Similarly, although one might think that it is not good to live in the past, researchers have shown that although some spend most of their time thinking about a ‘negative past’ (‘my life was very difficult’, ‘I suffered a lot’), others prefer to live in a ‘positive past’ (‘life was much better in my time!’, ‘Jeez, I had fun when I was young!’).

Initially, researchers suggested that some time perspectives would lead to more positive emotions than others. One might think that spending one’s life in a positive past or a positive future would bring nothing but good into our lives. However, this is not the case. It is possible that people who are constantly living in a positive past may have difficulty adapting to the present. In other words, the present time is less joyful than the past in which they are constantly being reminded of. Over time, this could lead the person to develop negative emotions. Similarly, while it is good to see the future in a positive light, this overestimation of the future could lead some people to take unnecessary risks (such as jumping out of an airplane to roll around in the clouds, thinking that everything is going to be okay) that could lessen their chances of survival.

Over the course of their studies, Zimbardo and Boyd began understanding that no one ever spends all of their time in one single time perspective. More so, the combination of different time perspectives predicts the emotions that a person is experiencing. Therefore, someone who has a strong tendency to live in a negative past and fatalistic present usually reports more negative emotions and depressive symptoms than someone who tends to live in a positive past and hedonistic present.

It was on the basis of these studies that I wondered what kind of memories (positive or negative) my Facebook friends’ childhood photos had evoked in me. I concluded that the majority of the photos rekindled happy memories. I had a lot of fun seeing all of you, my dear friends, from high school.

As I went to put my coffee on the kitchen counter, I thought, “Wow! I must be in a positive past perspective these days.”

And while I was surfing the internet a few minutes later to find the popular science book written by Zimbardo and Boyd called ‘The Time Paradox’, I discovered a website that allows you to fill out the questionnaire that these researchers developed to find out what your time perspective is. I took the test, and I had the highest score on the positive past scale.

Here is the website to do the test: http://www.psychomedia.qc.ca/tests/perspective-temporelle

If you’re interested, go make yourself a cup of coffee or tea, take out your iPad or computer, and give it a try!